I requested and received written permission to post these powerful words.

Battling with the dead
Posted by: S.M. [address deleted for privacy]
Dear friends,

Recently the Baha’i cemetery in Yazd, Iran was desecrated and destroyed. Below is a translation of an essay written in Persian about this event. The essay mentions how Baha’is are not allowed to attend universities in Iran. More recently they have been banned from vocational schools as well.

Should you fail to attain victory upon the living; battle with the dead.

I know not what it is that has overcome this land and nation. With the passing of each day, one notices more and more manifestations of weakness and desperation amongst those who reign powerful. It is as though a wellspring of the uttermost degrees of anger and hatred is gushing out of the depths of their beings. They are lost in a frenzy of bewilderment as to the manner in which to employ all that rage and fury.

Their animosity towards the Baha’is goes back a long, long, way: they captured the Baha’is; killed them; looted their homes and belongings; and fancied that they could extinguish the Divine Light of Truth. But, they did not succeed!

They picked upon the meek and threatened their lives and belongings! They exiled them and — running them away from their own homes and nation — sent them astray in strange lands. They burnt a few alive, while they took many in captivity; yet they did not succeed!

For a time, they inflicted their vengeance upon the students, and deprived them of entrance into universities. Then, they called upon them to enroll into universities! The youth welcomed the invitation and honoured their bidding, but instead were faced with obstacles as firm and mighty as the Uhud Mountain of Medina. Yet, the oppressors did not succeed!

The following year, they called upon Baha’i students again — asking them to try yet another time. Those youth abided by their bidding and participated in the university entry exams. They even entered the universities and endeavoured to embark upon their studies; but the oppressors began to expel those students one by one hoping that they may succeed in quenching the flame of their faith; yet they still did not succeed — for those youth also stood as firm and mighty as lofty mountains.

They turned their attention towards the schools. They employed a plan to train school-teachers to heap their retribution upon innocent children by somehow belittling them, insulting them, bringing them to tears, and making them shake with fear; yet they did not succeed! Not one soul turned away from his beliefs!

Upon failing to reign victorious on the living — be they children, youth or elderly – they set out to make war with the dead; for naught could be heard from the dead — nor any movement discerned from their direction — and so they were deemed the meekest of the lot.

Thus, riding upon their bulldozers, they directed their attack towards the Bahá’í Cemetery in Yazd. Like onto victorious warriors and brave soldiers, they charged upon the battlefield to fight the dead, so that perchance they may hear the cries of those resting in peace. They must have returned to their homes filled with pride and glory and announced to their families news of their victory! They must have announced as to how none amongst the inhabitants of the cemetery showed any resistance; and how they annihilated successfully all those residing there and demolished their homes.

Such is the bravery of a few amongst those in this land who bear claim to humanity!

Where is the learned man now to see that there are even those who imagine that Faith consists of a bunch of dead resting in a cemetery; so they demolish the graves, desecrate the corpses, break the tombstones, tear down the mortuary and leave in its place a deep hollow – thinking that by so doing they can wipe out Faith.

Are these not all manifestations of utter weakness?

Tell me then: to what do these signs bear witness?

[ end of original message ] The Persian text is here – the page includes photographs of the desecration. 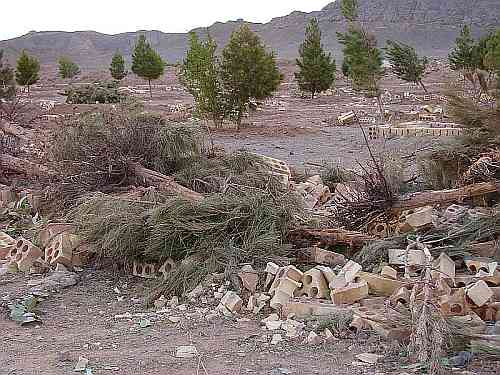 It’s easy to understand why the author of these poignant words is anonymous. In contemporary Iran Bahá’ís have been imprisoned and even sentenced to death for their beliefs.

Related to this is a powerful blog that I was told about a few days ago: http://bahai-egypt.blogspot.com/

“In a land full of bounties, history, ancient civilization and friendly people, the Baha’is, followers of an emerging global religion, struggle every day just to co-exist peacefully with all others and to serve their society. Here is their story….”

The author’s blog entry for 27 Sept. 2007 discusses Iran’s President Ahmadinejad, one of the potentially most dangerous people on earth today.