The Writings of the Baha’i Faith say:
“Thankful, the birds of the spirit seek only to fly in the high heavens and to sing out their songs with wondrous art.” — ‘Abdu’l-Bahá, Selections from the Writings of ‘Abdu’l-Bahá

Last month I began scanning many of my older photographs in addition to more than 120 images that I had not been able to successfully scan before. I scanned a total of 210 images. Most of my film scans were done between six and ten years ago. Now I have more knowledge of how to scan film, better hardware, and Vuescan, a much better scanning program than any of those that are bundled with film scanners. Six years ago the earliest versions of Vuescan were very simple and provided only the most basic settings. Now Vuescan has a very detailed and well written manual and a wealth of settings. Vuescan is very versatile and has versions that run on Windows (all versions), Linux and Macs.

This was my original scan of an image I titled Magenta Web. 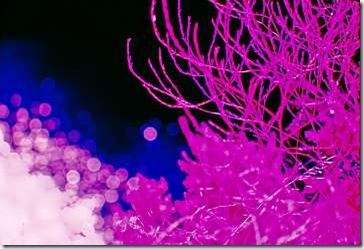 The new scan brings out the true vibrant colors of the original 35 mm slide.

This is an example of the details that are barely visible in an image that must be greatly reduced in size for a Web page. 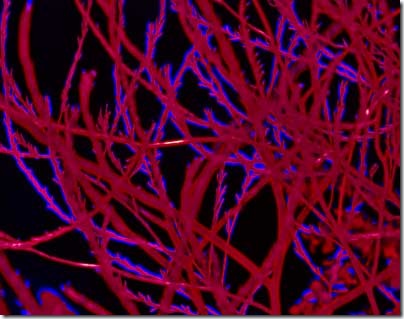 My scans cover so much detail that they take approximately 20 minutes each to complete. Each one is roughly equivalent to what you might obtain if you had a 42 Megapixel digital camera. In real life, no such camera exists yet. (The human eye’s resolution is equivalent to a 576 megapixel camera.) Scan dimensions can be as wide as 5400 pixels by 8100 pixels. Individual scans can contain up to 285 MB of data each which is roughly equivalent to what 12,000 typical Web page images contain. Unfortunately that also means that they capture every bit of dust, every flaw, scratch and damage on the film. All of my film pictures were damaged (see Part 1 for details). The scanner also makes an infrared pass over the film’s surface. Physical imperfections show up as shadows on the infrared channel. That enables the combination of the scanner’s firmware and Vuescan to repair them. The scanner incorporates recovery technology licensed from Kodak. You can see some of the damage to my image, The Serene Pilgrim, below: 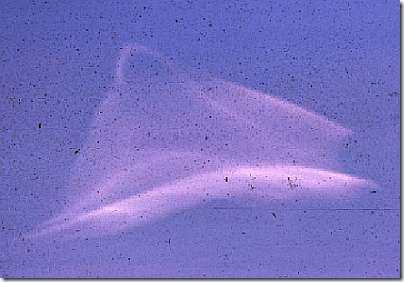 The new scan now shows the subtle colors that are really present in my original photograph. Vuescan eliminated all the damage so it required only minimal post processing in Photoshop.

Here is another example from one of my most abstract photographs. It’s an image of emotional turmoil. This was the original scan done six years ago. I never displayed it in my Web galleries because I didn’t like its colors. It was nothing like what I visualized when I took the photograph. I haven’t titled this image yet. 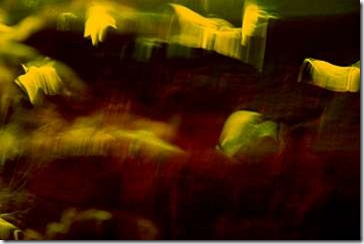 This is what the image is supposed to look like. Vuescan was able to restore its badly faded colors. 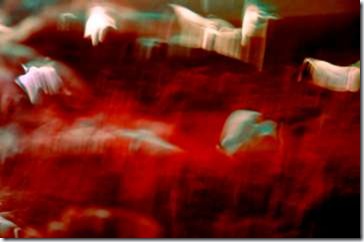 The Baha’i Writings say “Can you paint upon the page of the world the ideal pictures of the Celestial Concourse? The pictures which are in the ideal world are eternal. I wish you to become such an artist. Man can paint those ideal pictures upon the tablet of existence with the brush of deeds.” — ‘Abdu’l-Bahá (Source: Star of the West)

My web site really shows just an impression of my images. It’s important to realize that all of the graphics on my website are actually reduced by a factor of up to 10,000 to 1. The well-known portrait of ‘Abdu’l-Baha With Flowers (photographed in1972) is a 7400px-wide file that is 280 MB file in compressed format. On my website, it’s 360 pixels wide and about 21 KB in size. That is .05% of its original size and .0001% of the real details that it contains. To put it another way, you would need an array of over a dozen 21-inch monitors to see it at its full size. Such reductions are necessary for Web presentations.

To me, the sad part as an artist, is that it is like displaying my photographs across the street from the viewer — behind a smoky glass window — in the rain. Yet it’s necessary because hardly anyone will stick around for an image that takes two or three minutes or more to load. Some specialty photo sites do that but it is rare. I have little doubt that many artists feel about their Web presentations the way that writers do when they see their work dumbed down and heavily abridged for Reader’s Digest.

Another point to consider is that image theft occurs very frequently on the Internet. People copy images and then claim them as their own and sometimes they sell inferior copies of the images that they steal. ‘Abdu’l-Bahá With Flowers is not for sale. It is a derivative work because it is a multiple exposure that includes a small part of a portrait that I did not paint. The actual portrait is nearly full length and has a plain background. If it was not a derivative work I would release it under a “Creative Commons” license. I give copies of this image away freely to anyone who wants to print a copy for their own use. It is not in the public domain so it is illegal to sell copies of it without my knowledge and permission as its creator. Every other work I have done is fully copyrighted.

I have been in people’s homes where I have seen very poor copies of ‘Abdu’l-Bahá With Flowers that are either badly cropped, faded or partially out of focus. I have also heard miraculous tales about its origins by people who did not realize where it came from or that part of it was a painting.

What you don’t see (this is also greatly reduced to fit on this page):

Another part of what you don’t see (this is also greatly reduced to fit on this page):

What you do see (optimized for the Web; a much larger copy is downloadable for printing):

In the version above I removed the canvas texture and adjusted the color saturation to make the flowers ‘jump’ out. Below is a reduced version of the unedited original Kodachrome II photograph from 1972:

I scanned a Kodacolor negative of the original 35mm slide that I made because the original was too badly damaged to recover. See After The Flood to find out what happened.

Continue on to Part 2 of this theme.

I search for quotes from the Bahá’í sacred writings that I feel will complement my images. As I wrote yesterday, “Sometimes I have a specific passage or concept from the Bahá’í writings in my mind when I go out to take photographs. More frequently the assigned titles are afterthoughts.”

A few months ago I wrote about the flood damage that destroyed 15 years of my early photographic work and left only about 400 slides that were recoverable. The rest which numbered over 1500 slides were permanently destroyed under a deep layer of silt and sewage. Some of my photos suffered more than damage; they were simply poorly exposed or uninteresting.

This image shows a detail section of one of my photographs after I scanned it. My dedicated film scanner has the ability to suppress most scratches and dust marks. It does that by performing an infrared scan of the film after scanning its three color layers. The scanner can then clearly detect dirt and scratch marks and interpolate data from surrounding areas to fill them in. The scanner cannot do anything about larger blemishes like the mildew spot shown in the upper left corner of this image. You can see two other damaged spots also.

This photograph was cross processed. That means that it was a roll of 35mm slide film that I developed as if it were a negative. I also used a green filter to enhance the effect. The negative or opposite of green is magenta, thus the developed color. I was able to invert it in Photoshop and carefully brush out the damaged portions. I also replaced the resulting greenish sky with blue. The scanned image had a caption that I had sandwiched onto it in a slide copier. The original uncaptioned image was not retrievable because of the flood. Unfortunately this one suffered some fading and had lost its original vibrancy. 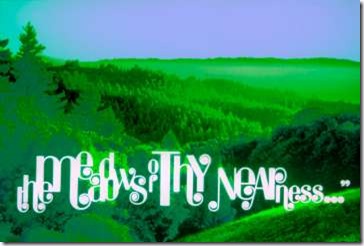 I was not attempting to create a realistic image. As always it is the color intensity that fascinates me. See My Perception of Color and the article that follows it, Flowers on the Sun.

This is a scan of a lightly damaged bird image. Almost all the bird photographs that I made were at the same spot in Golden Gate Park at Mallard Lake near 25th and Lincoln Avenues. The composition was uninteresting and the red detail was difficult to bring out. Nevertheless I was unwilling to discard it.

Simply increasing contrast and brightness doesn’t really work. That results in two-dimensional bright yellow birds and a dull picture. What I really wanted was a sense of motion and dramatic color. 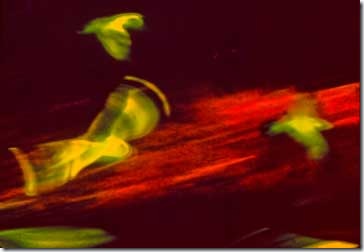 This is closer to what I visualized when I photographed the image. 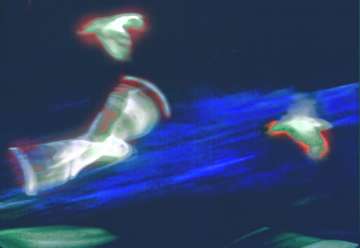 “This is the day on which the Bird of Utterance hath warbled its melody upon the branches, in the name of its Lord, the God of Mercy. Blessed is the man that hath, on the wings of longing, soared towards God, the Lord of the Judgment Day.” — Bahá’u’lláh 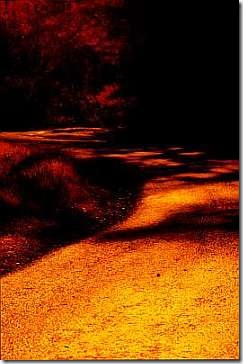 This image was photographed through a very dark red filter but on a brightly lit path. There was no shadow detail to recover. The slide also had some large areas of damage in different parts that the scanner could not repair. I am still working on this image. 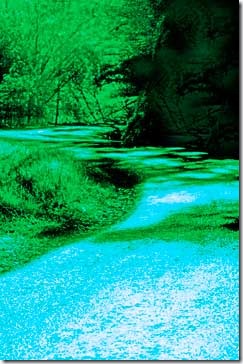 “By Him Who is the Truth! I fear no tribulation in His path, nor any affliction in My love for Him. Verily God hath made adversity as a morning dew upon His green pasture, and a wick for His lamp which lighteth earth and heaven.”
— Bahá’u’lláh

A page on my website shows more examples and explains more about my visualization techniques. 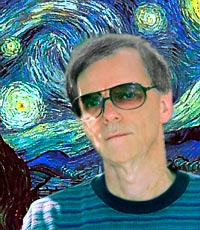